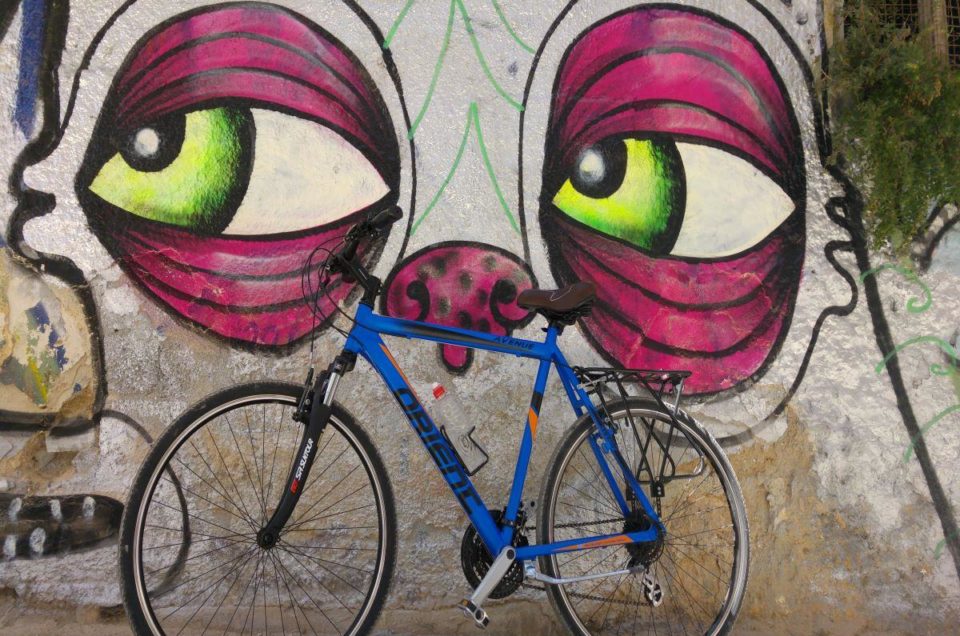 Street art in Athens- hidden gems from Athens By Bike

Street art in Athens is very popular. Walking around some of the local neighborhoods of Athens, it’s one of the first things everyone notices. It’s everywhere, and that’s the reason why most visitors think in the beginning of their trip that graffiti in Athens is legal. Well, sorry to spoil it, but it’s not. In a way the city just tolerates street art in Athens and it’s pretty obvious that it will never stop growing here. Graffiti was always controversial: is it art? Is it vandalism? Well, it can be both and we do have both here. From silly and ugly tags to huge murals and beautiful pieces of art.

As I was growing up I got inspired by some artists in my neighborhood and I started drawing some graffiti in Athens on my own. Soon, I realised I was horrible, so I stopped and now everyone is happier. Several friends of mine continued drawing and they started to make a living out of it by selling art through galleries. The thematology of street art in Athens is vast, covering everyday life topics such as politics and financial crisis, to complex categories such as Greek mythology and love. As with the real estate market, the quality of graffiti in Athens depends on 3 important factors that I will analyse later on: Location, location, location! 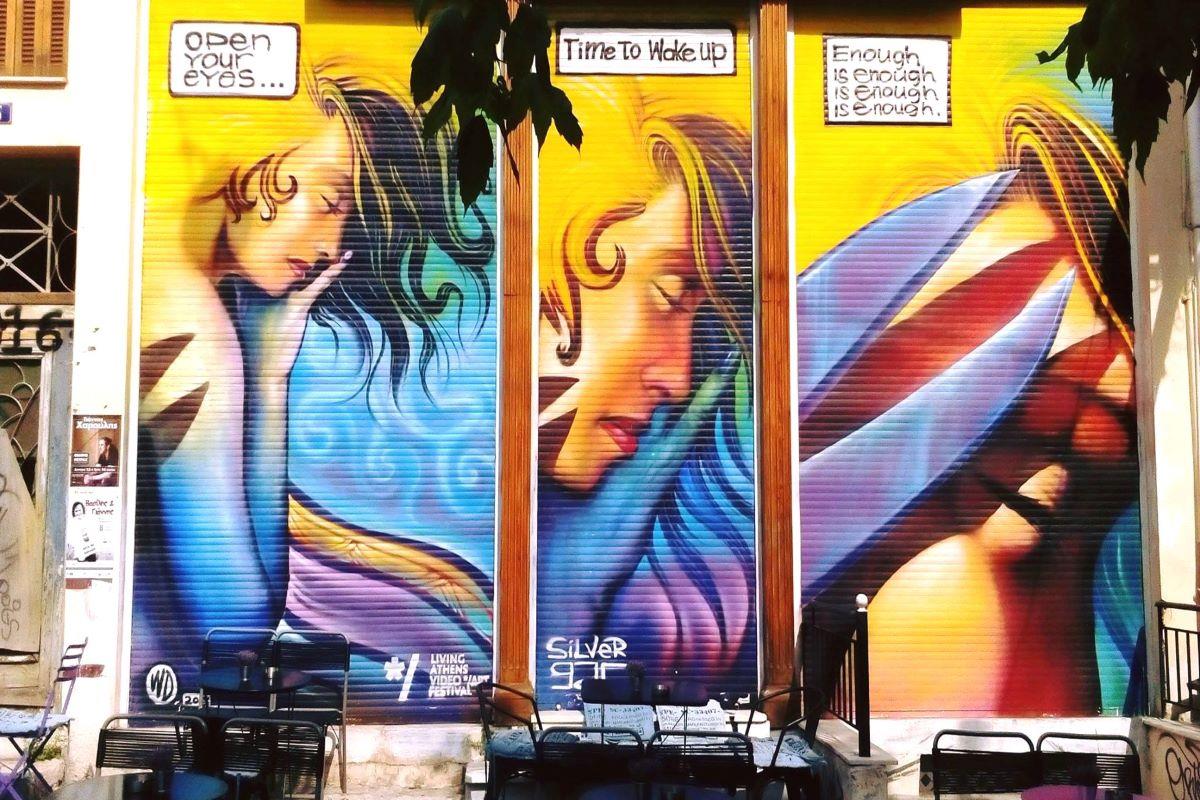 Hundreds or even thousands of artists, from Athens and the rest of the world, have contributed to creating this so-called alternative Athens. Over the years I have either met,  heard or read about a lot of them. Some are self taught, some are well educated in Fine Arts, some are rich, some are homeless… “It really doesn’t matter where you come from and how you were raised, Art is Art”, one of them told me once. And this is true, it’s actually the definition of art. Trying to make life feel better and more beautiful was always in the nature of human beings. Some of the most iconic artists and teams of artists in Athens are (click on name for more info):

Since painting graffiti is illegal in Greece, there are only 2 ways to actually do it. Either paint something quickly and run or get a formal invitation by the owner of the property. Owners in luxurious and prestigious neighbourhoods never invited a street artist to paint anything, so, as you can see, you have to go to the “bad” areas, where owners would actually like to have their walls painted and look good! These local neighbourhoods of Athens are not dangerous, the city is quite safe and if you take the normal precautions you will be just fine. 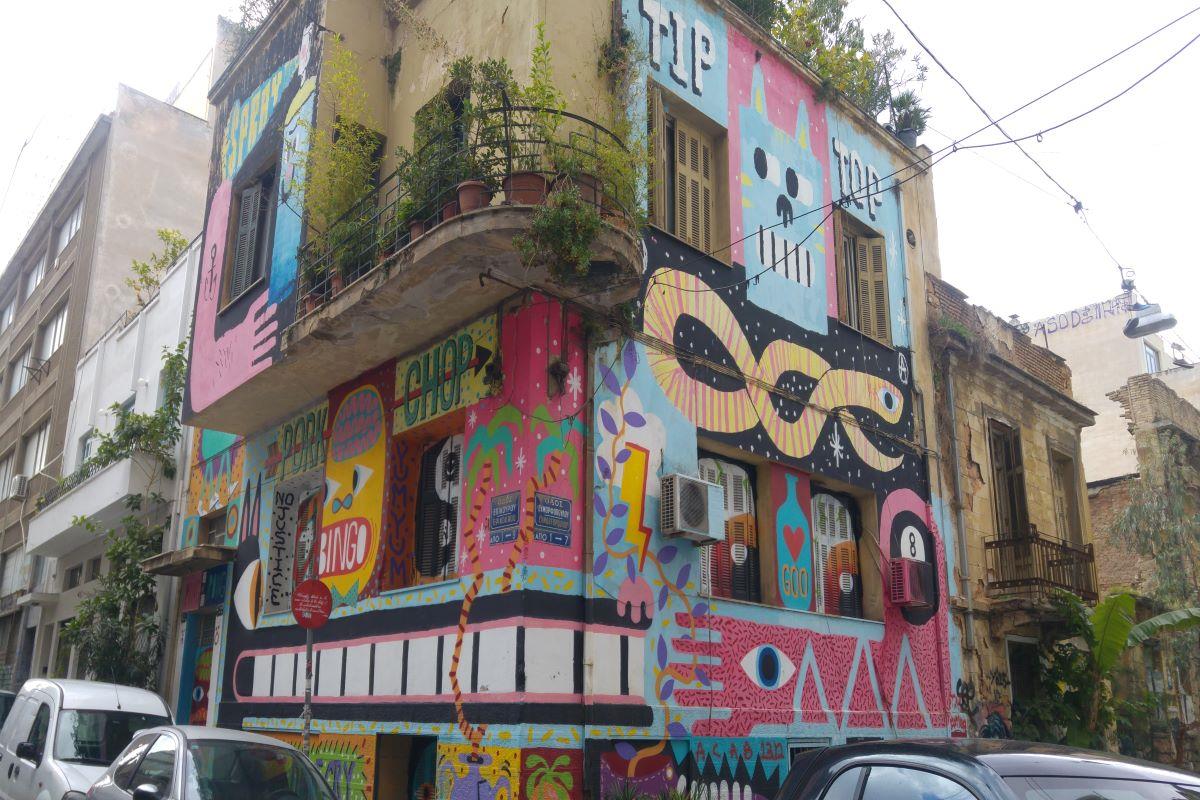 One of the most beautiful local neighborhoods of Athens! It used to have an extremely bad reputation up to the 90’s when the reformation began. Some of the best restaurants, bars and street art in Athens are here! Although it’s centrally located and very well known to tourists, I’m surprised every time I go there by the numbers of locals being around, for their everyday coffee, lunch, drinks and more. The famous Varvakios market is just across Athinas street and, of course, here you’ll find the spice and herb market on Evripidou street. I personally never buy spices from the supermarket, I always visit this area, as the quality is the best, plus I get to experience the strong local vibe of the neighborhood! And, of course, every time I want to check some new graffiti and check out an alternative Athens, that’s the place I’m going!

The infamous “Red Light District” of Athens has been through a lot of changes and extreme gentrification over the last few years. As a kid, I was told to avoid going into this area even in the morning, since it was also quite dangerous, but that’s not the case anymore. The way it was changed is pretty much the same with all the “bad” neighborhoods. First, since the place is not safe and pretty, all the prices for flats and homes go down. Then, artists come and take over because they are usually quite poor. Slowly, they reform the neighborhood into something amazing. Finally, since it becomes a great place to be around, it gets better and better and the prices go up as well. Now it’s one of the most alternative local neighborhoods of Athens with a lot of great cafes, taverns and bars! Of course, I feel 100% safe to walk around this place. Street art is pretty much everywhere here, so I don’t have to look hard to find some really nice examples of graffiti in Athens. 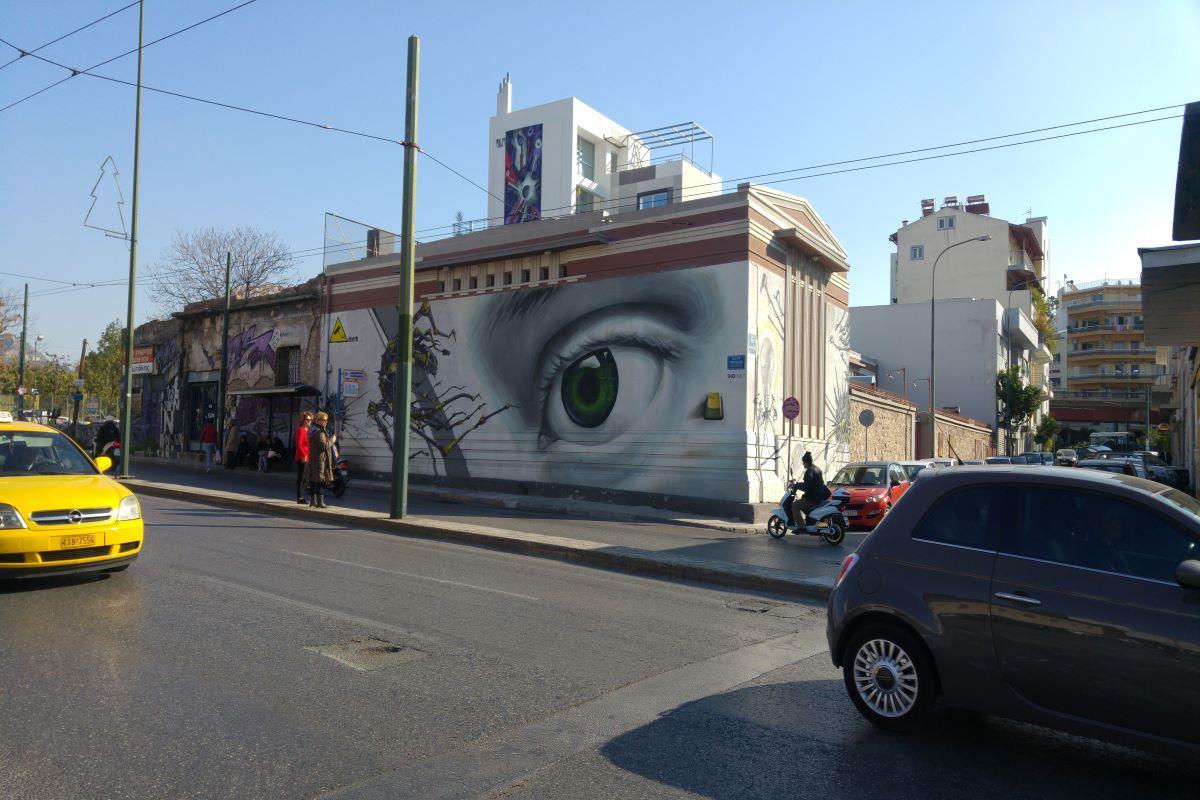 The area around the old gas factory was an industrial area with many factories and businesses. As the city was expanding, all the factories moved to the outskirts At the moment, it’s one of the bar centers of alternative Athens, hosting numerous parties and when I want to feel the nightlife vibe of Athens, this is where I go. I’m not a 20year old anymore, so I have actually stopped going out around this area, but every time I’m going through it, the feeling is the same. Apart from extreme partying, I actually have attended some great music concerts and festivals around there. The old gas factory has been converted into a museum and a festival center and it’s a great place for that matter! And I’m talking about any type of music! You can check out the events on the official website HERE. In most streets around the neighborhood I can still see some new cool street art in Athens! 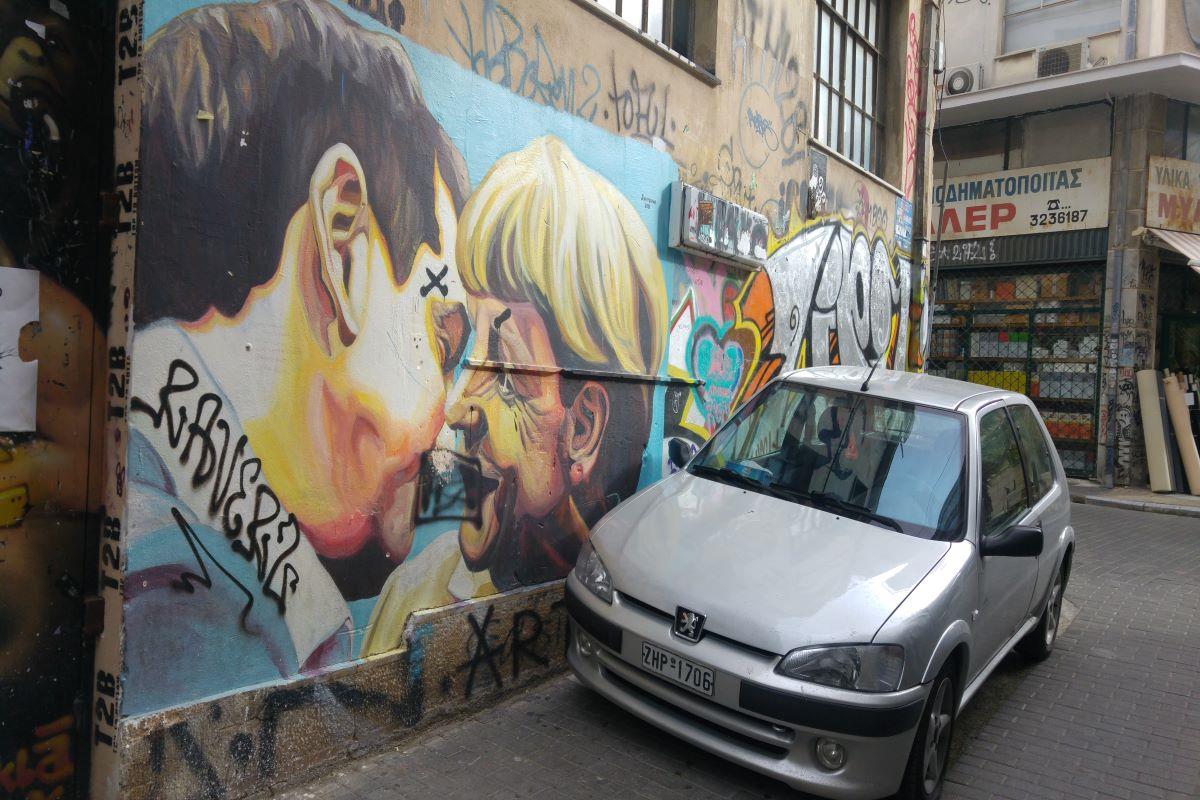 Used to be the neighborhood of the anarchists, but now it’s the most hipster bar area with nice street food places as well. Keeping the old identity of the area, most of the street art in Athens that I see here over the last years is politically and anti-police driven. Growing up in Athens, I was seeing that this place was something like a ghetto that the police were never entering. The last few years though, the identity of this local neighborhood of Athens has been changed through gentrification. Still, though, I get that “anarchist” vibe whenever I go there! Great drinks, great food and some of the best graffiti in Athens is what I get every single time I am visiting Exarcheia! 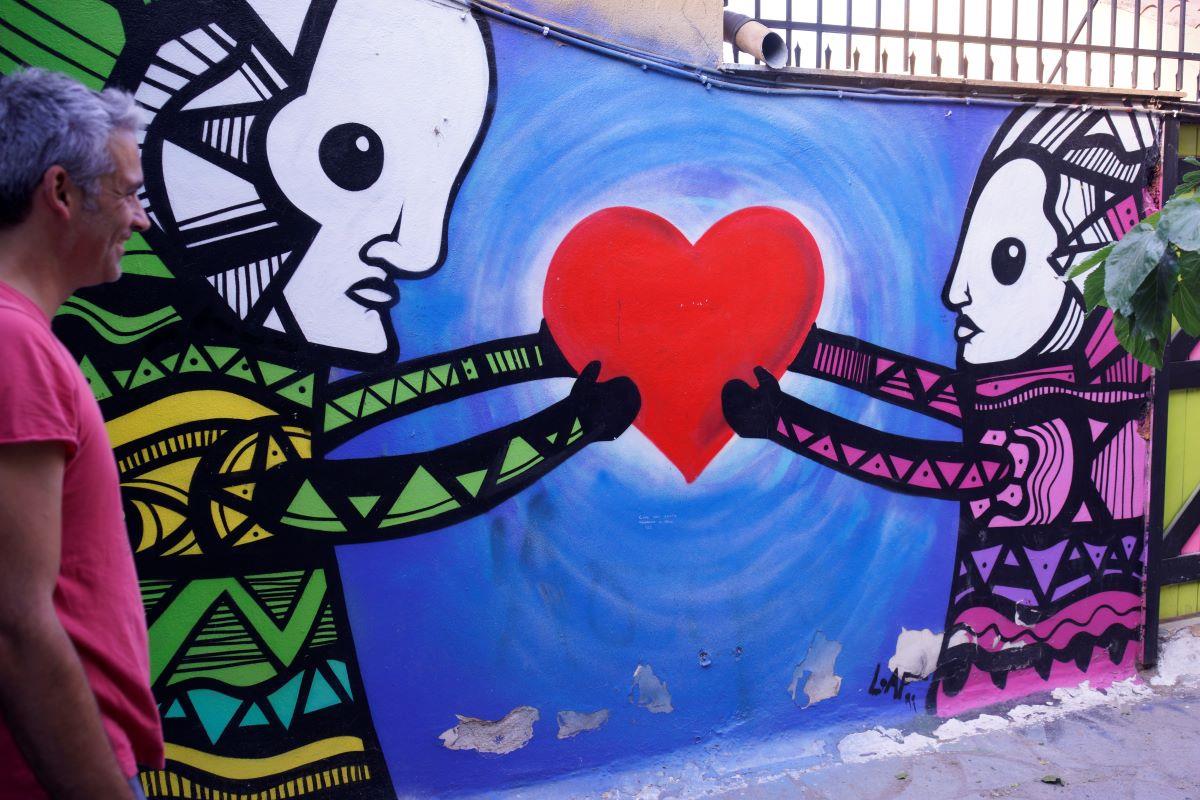 “Secretly” located in a corner of the Plaka neighborhood, Anafiotika is one of the most iconic hidden local neighborhoods of Athens! This tiny scenic neighborhood looks exactly as a neighborhood on the famous Greek islands, like Santorini and Mykonos! The first time I got in here, it was pretty intense, I was not expecting something as beautiful as this in the heart of the city and so close to the Parthenon! The proximity to Acropolis would normally mean that the government would try hard to keep it clean and graffiti-free. But, surprisingly, that’s not the case! Every time I go around this place I’m shocked by the amount of street art hidden around the small streets of this unique place!

In February 2020, we hosted in Athens the annual cycle cities symposium. During that time, our friends and colleagues at Berlin on bike wrote an amazing article about street art in Athens. We thank them a lot for their passion and you can also read that article HERE.

Street art in Athens is a pretty big deal and it’s quite spread around the city center. Since you’ll have to cover some distance to go from place to place we recommend you to do it on a bicycle, the best eco-friendly and fun way of going around in any city! If you don’t have one you can rent one from Athens by bike! 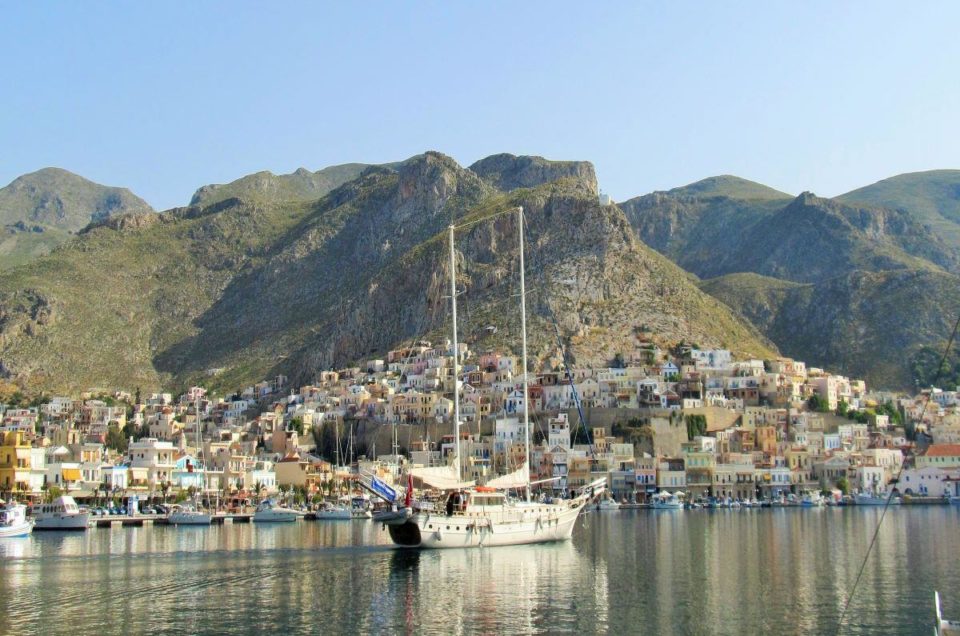 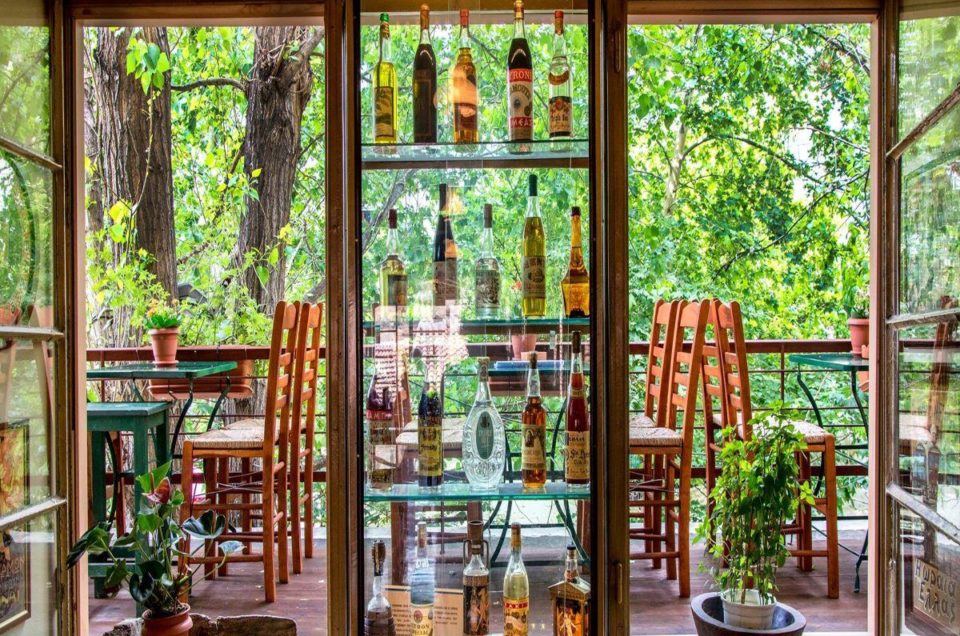 The best coffee shops in Athens – Athens by bike suggestions